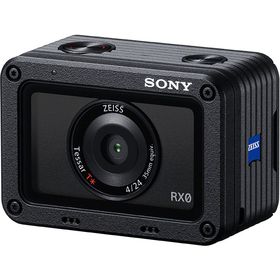 The lightweight Sony RX0 Ultra-Compact Camera offers professional image quality in an action camera–sized form factor. Capable of outputting uncompressed 4K UHD video, it also records up to 1080p60 in-camera at 50 Mb/s in XAVC. A Zeiss 24mm-equivalent f/4.0 lens provides a wide, but not distorted, field-of-view. Its 21MP 1" stacked Exmor RS CMOS sensor produces minimal rolling-shutter artifacts, and is protected by the RX0's waterproof, crushproof, and shockproof body. Use the versatile, diminutive RX0 as a single camera that fits almost anywhere, or for multi-camera recording, timecode-sync up to five cameras. When connected to a Wi-Fi router, greater than five cameras can be synced, suiting the RX0 for concerts, stunts, and other multi-camera applications. Camera control is offered via the Sony Play Memories smartphone app (iOS and Android).

BIONZ X™ for superior detail and texture
The high-speed BIONZ X image processing engine from Sony is as important as the lens and image sensor, as it powers conversion of light captured by the sensor, so photos and movies can be recorded with more natural details, more realism, richer tonal gradations and lower noise.

Remote control via smartphones and tablets
Thanks to built-in Wi-Fi, up to five RX0 cameras can be remotely controlled from a smartphone or tablet. Simply download free PlayMemories Mobile app to your mobile device for remote control of camera shutter release, movie recording start/stop, and instant receiving of captured footage. Also, Bluetooth is available and allows remote power on/off operation.

Adjust images with superior flexibility and precision
The S-Log2 is a proprietary gamma setting from Sony that is invaluable for professionals seeking post-production flexibility, and extends the dynamic range of recording to reduce occurrence of blown-out highlights and black crush. Picture Profile determines the character of movies by changing basic parameters like chromogenic effects and gradation adjustment.

For more flexible shooting systems
The compact, simple, protrusion-free, rectangular body is advantageous in combination with optional accessories. Also, Upside-down Flip Capture flips the image the right way around when the camera has to be mounted upside down according to certain setting requirements.

Clean HDMI output for 4K movies17
For production flexibility, you can use Clean HDMI output to record uncompressed video to an external recorder in your choice of formats and bitrates, including non-compressed 4K movie, and monitor the footage. Moreover, stunning high-precision 4K images with suppressed moiré and jaggies can be delivered via data readout without pixel binning or line skipping.

Up to 16fps continuous shooting with reduced blackout
Despite its 15.3MP high pixel count, the super-high-speed image sensor boosts readout speed to the extent that the camera can achieve continuous shooting up to 16fps. This lets you capture moments of fleeting beauty or facial expressions.