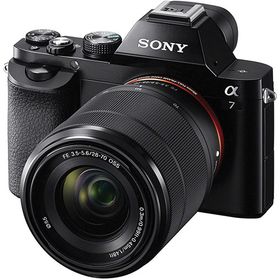 Information on the Sony A7 Mirrorless Camera

The Sony Alpha a7 II is an image-stabilized full frame mirrorless camera, the fourth release in Sony's a7 lineup and the follow up the original a7. It uses the same 24-megapixel sensor as its predecessor, and the same Bionz X processor as the rest of the a7 series. Improvements come in the form of 5-axis sensor-based image stabilization, improved AF performance and some overall design tweaks. The controls are laid out in similar fashion to the a7, though the grip, command dials and shutter have been completely redesigned.

The body of the a7 II is physically larger, and about 25% heavier than the original a7-series cameras. It is also now comprised entirely of magnesium alloy like the a7S; the original a7 and a7R featured a frontplate made out of a composite material.

The A7 II uses the same hybrid AF system as the A7 with 117 phase-detect and 25 contrast points. Sony claims AF has been improved about 30% over its predecessor thanks to algorithm tweaks, and tracking has been improved 1.5x.

High-performance Fast Hybrid AF
The newly enhanced Fast Hybrid AF system delivers extremely high-speed response, highly accurate prediction and wide area coverage for autofocusing and tracking you can always depend on. It’s remarkably fast for a full-frame camera AF system (30% faster than the α7) and accurately predicts subject movement so you can steadfastly track your subject.

Lock-on AF tracking
It’s easy to keep moving subjects in focus with enhanced Lock-on AF, which analyzes even more information from the scene to ensure usage of the optimal AF point for smooth, stable autofocusing. Its ability to detect and track moving subjects has now been significantly improved, thanks to Sony’s advanced proprietary image analysis technology.